We have the American Independence Day Celebration at the end of this week. Yay!! Yay for clogged highways. Yay for flight delays. Yay all round. Yay for a 4 day Trading week with an ECB rate decision, Employment numbers, Non-farm Payrolls, PMI, as well as Retail Sales from the World’s biggest economies. It’s going to be a pretty volatile trading week in the Forex Markets.

I talked about intervention in my last post. I mentioned that the Swiss had engaged in that substantially earlier on this year to stem the strength of their own currency. Well, they did the same again last week. This time they bought both the EUR/CHF and the USD/CHF. Take a look the graph below and you can see just how drastic an effect such an action can have, in the short term. 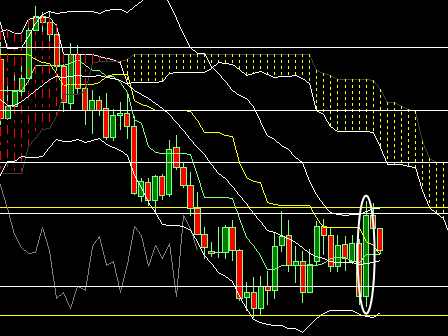 What this chart also shows is that trends are powerful things. It will take more than this sort of action on the part of one group (in this case, the Swiss National Bank) to unhinge an overall trend, start a new one. You can see that the dollar has lost substantial value against the Swiss Franc in the couple of days following the action of the Swiss National Bank. A little pullback is usually expected after such a move, but there are other factors at play here.

Most newsworthy is the statement coming out of China. They are making the call for a new reserve currency again. They did this before, but didn’t follow through with more words or action when Geithner visited some weeks ago. Infact, they seemed to take a step back. So, it’s a bit strange that they are back on that again. It was enough to make the dollar lose some more steam. I am not sure how far they will go down this path though. While the need to diversify out of Dollars is important and valid for them, China has something to lose if they keep pushing this line during a global recession such as we have now. In the short-term, they are still linked to the United States. If the dollar loses too much value, there won’t be a lot left to spend on products. China likes powerplays though, so we might continue to see more of this sort of behavior if they think they will gain some preceived leverage from it.

The Brazilian Real, meanwhile, continues to gain and gain. It’s performance this month is second only to the pound against the dollar. Check out this story on Bloomberg which talks about an IPO in Brazil that is helping to fuel this. Stocks there are doing great. Thus, the Brazilian Central Bank is still buying dollars, to reduce the speed of growth of the Real, and also to develop it’s foreign currency reserves.

However, if the trend is still dollar weakness, then it’s going to take more than buying dollars to stop it. The trend for this week is still for dollar weakness to continue. The Volatility index has dropped considerably this week. There are still signs that the economy is recovering. The dollar should still be on the way down. Expect to see more action from the Swiss if the Franc gains too much against the dollar though.