They say a picture says a thousand words. That’s also true for the EUR/USD Forex Chart below; except in this case I am not all that sure what those words would be. 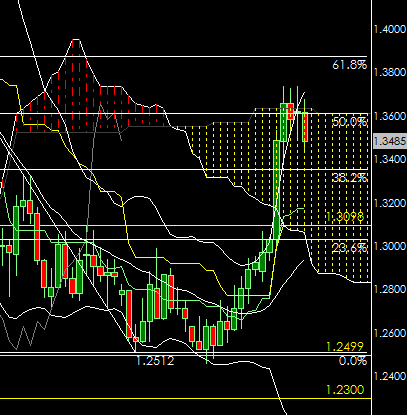 Geithner and his friends came out with more details about they were going to do to fix…you know…everything. It’s funny. I saw Geithner make his initial announcement about the plan a little while back. It was notable. Investors expected substance to go with whatever confidence would be on display. They pretty much got neither. They sure as hell weren’t satisfied. That was not a good day for the markets.

Well, this time, he looked like a different person. You can see why Obama chose him. He knows his stuff. He seemed confident, knowledgeable…there was even a hint of humour there. Mind you, this was coming on the heels of the rally on Wall Street (Bernanke opened the flood gates…). His plan is also clearer, containing more of the aforementioned (and greatly desired) SUBSTANCE. Result – Good day on Wall Street. Bad Day for the Dollar. So, you can see how on the EUR/USD chart above, yesterday’s bar shows that move.

Today, there was some profit-taking, as would be expected after a big move like we saw yesterday. Once again, this is clearly visible above. What does it mean? Are we about to continue the downward trend? We are still very much in that trend. Was this merely a Bear Market Rally, of is this the real deal?

It’s difficult to say. Things just aren’t as clear cut as I would like them. The Fed unleashing a trillion dollars on the World is, in itself, dollar bearish. However, the dollar is still the most trusted currency. It’s status is being challenged, no doubt. China went as far as to call for a new super currency today. That was not enough to stop the rebound today though. If the Feds ploy starts to work really soon, then that would be good for the Dollar, longer term. Europe is still showing cracks. The US is still on the leading edge here.

In October last year, all of this was straight-forward. I made the most money in my Forex trading carreer when the initial Bailout was announced, along with the plan for the auto bailout. All that went to hell and it was literally buy dollars and yen against everything! Simple times. Predictable times. Good times.

I think there will be a cooldown while people wait for news. There are numbers out that will affect the US Dollar and Europe tomorrow. I don’t expect any major moves, but you never know.

Another thing worth mentioning is that Oil has been quietly gaining. How long will it be before we’re up to the levels we had last year? not long enough, if you ask me…